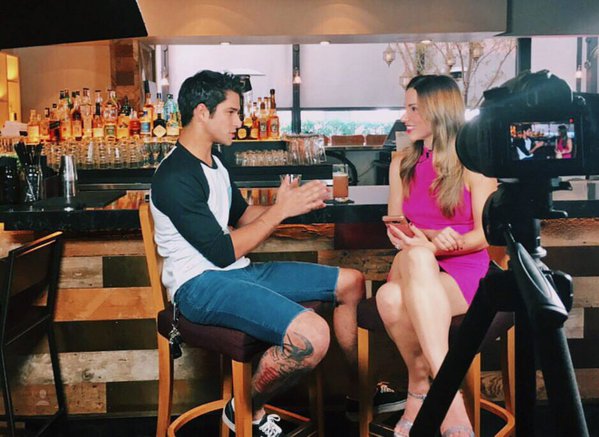 You may have noticed that for the last few months my social media feed has been full of pictures of me day drinking in the hottest spots in Los Angeles with some of the biggest TV and movie stars today!  Yes, I am working!!! 🙂

I’m excited to officially share I’ve joined the incredible team at TheWrap.com as Host and Producer of their video series Drinking with the Stars and Studio Wrap!  There is so much to come, but here are a couple of my favorite episodes so far:

Tyler Posey has more energy than anyone I’ve ever met!  He is SO MUCH FUN! Here’s our episode about the return of Teen Wolf:

I am a huge Suits fan, so I was thrilled to sit down for some cocktails with Gina Torres.  She plays Jessica Pearson, the badass #girlboss and partner in charge!  Gina is absolutely hilarious and knows how to have fun.  And I died when she talked about those late night scotch sessions with Harvey …. Watch the episode here:

I also love playing a game called ‘Wrapid Fire’ where I basically fire off as many questions as possible in a short period of time and have the celeb answer at a … you guessed it .. rapid fire pace!  Dominic Sherwood, star of the hit show Shadowhunters, did a great job at this even thought I tried to stump him with some questions about his real life girlfriend, Modern Family Star Sarah Hyland! Enjoy:

And I just got to spend an incredible afternoon with LL Cool J talking all things Grammys, his new music, Lip Sync Battle and more. There is a reason this guy is so successful = he is a total class act!

Keep your eyes on this space and TheWrap.com for future episodes! Cheers!